Welcome to Perth – the largest city of Western Australia. Visitors to Perth will find themselves immersed in a diverse mix of spectacular scenary and city culture. From its world class beaches and beautiful parklands, to its rich heritage, the vibrant city of Perth has something to offer around every corner!

Before you arrive in Perth you should look into renting short term accommodation while you find your feet. Perth offers a wide variety of hotels, B&BS, hostels and short term rentals!

Hostels in Perth are a great form of cheap accommodation, while you look for a more permanent residence. The Wickham Retreat, Kangaroo Inn and the Witch's Hat Backpackers Hostel come highly recommended as some of the best of Perth's hostels.

Some people choose to stay in hotels in Perth which of course can be more expensive than staying in a hostel. For short term stays though it may be a preference for some people.

Flights to Perth, Australia land in Perth International Airport which is approximately half an hour away from the city centre. The international and domestic terminals are easily accessible by car, taxi and bus. A taxi trip from the airport terminal to Perth city centre will take 20 to 30 minutes. The journey will cost approximately AUD$40.00. Perth Shuttle bus operates to and from Perth Airport's Domestic Terminal 3 to Perth's city centre. Car hire in Perth International Airport is available also.

Things to do in Perth Australia

Embrace the Culture in Perth

Western Australia is one of the oldest lands on the planet and it also has an amazing Aboriginal history which dates back 40,000 years. Perth city and its surrounding regions are alive with a spectacular mix of music, theatre, comedy, dance and visual art. Explore a variety of cultural attractions, including art galleries, museums, theatres, performance centres and much more.

When it comes to nightlife Perth has a great selection of nightclubs and bars, which will cater for every taste. Perth's Northbridge area is best to visit for those looking to dance the night away! At Northbridge you will discover around twenty of the best nightclubs, over one hundred eating establishments and lots of bars.

The busiest days are Thursday through to Sunday but there is plenty of atmosphere here throughout the week. One major Perth tradition is to go the pub on a Sunday afternoon with your family and friends. This particular tradition has become known as the ''Sunday Session.''

Some of Perth's Tourist Attractions

Fremantle Prison
Fremantle Prison, which is located on Terrace Fremantle, is an amazing Perth attraction for all to visit. This former prison was built during the 1850's by convict labour. It officially closed its doors as a prison in 1991 before reopening as a historic site.

Kings Park
Kings Park is a beautiful park that shouldn't be missed when you are in Perth. It is home to over 300 native plants and 80 bird species. Kings Park is one of the most popular attractions in Western Australia with more than five million people visiting annually.

Perth Zoo
This 41 acre zoo opened its doors in 1898 and today, it is home to over 1258 animals of 164 species. A trip to Perth Zoo is a great day out for the entire family. A must see family friendly attraction!

Australia Tourism
As you create your wish list of things to do and see in Perth, be sure to check out Tourism Australia to get more ideas! Visit Lonely Plane Australia too for some great information and facts about some of Australia's tourist attractions.

Perth hosts a number of top notch annual events, which you are sure to enjoy. They include:

The Perth International Arts Festival began in 1953. This enormous cultural festival has been recently joined by the Perth Fringe Festival, the Perth Writers Festival and the Winter Arts Festival. So, if you are looking for a splash of culture; Perth won't disappoint!

A number of concerts take place throughout the year in Perth including Soundwave and Big Day Out.

Sculpture by the Sea:

This popular sculpture festival features a number of works by local and international sculptors. It takes place on Cottesloe Beach. Cottesloe Beach is one of the most beautiful of Perth's beaches. A lot of tourists visit here year round to take in its splendour and have some fun!

Perth's International Comedy Festival allows you to see a variety of local and international comedians showcase their talent. This fun festival takes place at Perth's Astor Theatre and at other lively venues throughout the city. 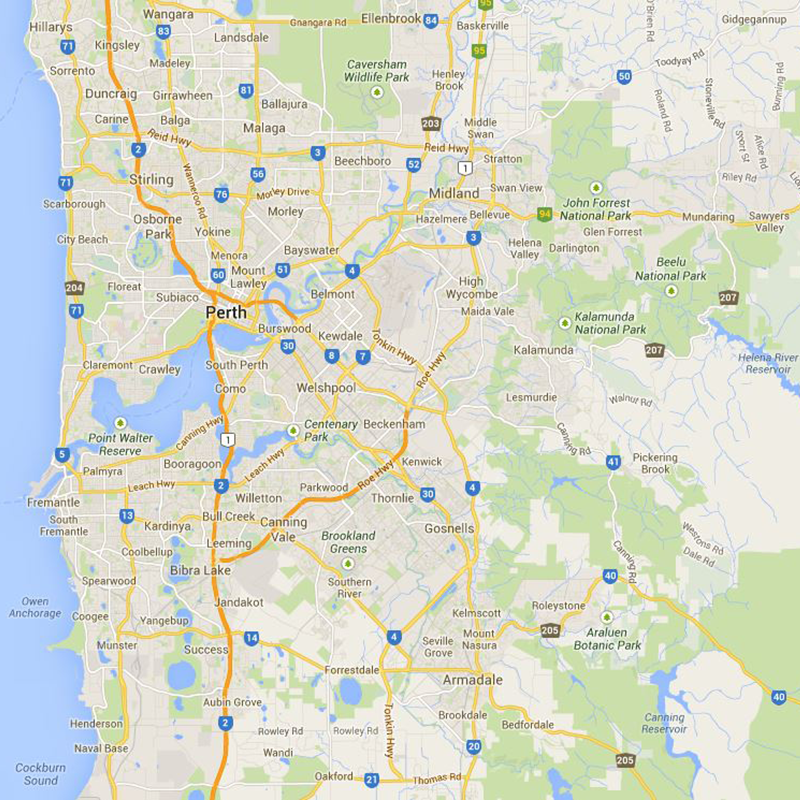 Currently in Perth there has been an increase in activity in jobs in the following areas: banking and finance, engineering, healthcare and medical, trades and services. There are also many jobs in construction and retail.

By Bike and By Foot

Perth is one Australian city that can be easily explored by bike and on foot. If you wish to cycle, cycle maps are available to purchase from most cycle shops.

Perth's Public Transport System (Bus and Train) is reliable and a very inexpensive way of getting to and from any part of the city.

Some people choose car rental as an option to get around Perth depending on the length of their stay. However this choice of transport can be expensive in comparison to public transport.

After Sydney, Darwin and Brisbane, Perth is the fourth wettest Australian city. The weather in Perth during the summer is normally hot and dry, lasting from December until the end of March. February is the hottest month of the year, while Perth's winters are usually cool and wet.

The currency in Perth is the Australian Dollar (AUS$).

If you wish to familiarise yourself with Perth and its surrounding areas or if you would like to find the best sights and attractions that the city possesses, it is recommended that you visit one of Perth's Visitor Information Centres. It is always a good place to stop at before you hit the city as you will be able to get city maps, brochures, information on tours and much more.